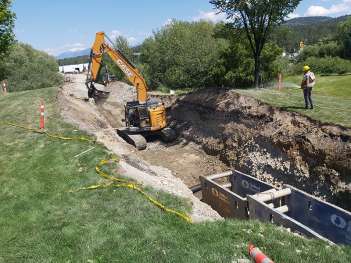 Cranbrook, BC (October 25, 2021) – The City’s significant influent sanitary trunk main project is reaching completion by the end of October.  The contractor Hazelwood Construction Services are in the final stages of completing the installation of the new influent trunk main at a $4.5 million contract value.

The overall Wastewater Lagoons and Influent Trunk Main Upgrade project will increase the quality of effluent treated. It involves replacing all the piping between and under the lagoon cells and installing a new trunk main that enters the lagoons from the intersection of Victoria Avenue and Highway 3. Improvements to the overall site will also be undertaken to increase the efficiency of the treatment operation as well as extend its useful lifespan. 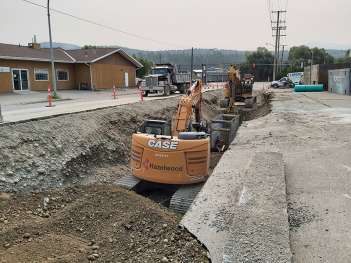 Meantime, around the lagoon cells portion of the project, Public Works has employed the use of a microbial blend that is intended to induce biological desludging at the sewage lagoons site. This economical product has been applied by staff over the summer directly to the lagoons with hopes that the sludge levels will be reduced, which will also improve the lagoon operational effectiveness. Sludge levels and their impact on operations are the primary reason for the seasonal odour issues that have occurred recently when warmer runoff and effluent begins to be introduced into the system in the spring.

Further upgrades and improvements to the lagoons are in the later design stages. These are part of the overall grant awarded project which also includes the influent trunk main construction from the lagoons up to Victoria Avenue. With continued volatility in supply chains and construction prices, City staff are working with their consultants to determine the best approach to the staging and implementation of these lagoons’ projects, with desludging of the first lagoon cell being a high priority for 2022.

More than $4.1 million in project funds came from the Government of Canada’s Investing in Canada Infrastructure Program (ICIP) – BC - Rural and Northern Communities Infrastructure Stream (RNIS), and over $3.2 million provided by the Province of British Columbia. The City is contributing a total of $822,066 to the project.

The City of Cranbrook gratefully acknowledges the financial commitment of both the Government of Canada and the Province of British Columbia toward this important environmental work.