Cranbrook, BC (February 26, 2020) – A total of 8 deer (3 mule deer and 5 whitetail) were removed from the urban herd in Cranbrook over a 12-week period, as part of the City’s ongoing program to reduce population numbers in an effort to reduce aggression incidents and complaints from the public. Operations ended on February 24, 2020.

A total of 353 lbs. of meat will be distributed to several local non-profit organizations for human consumption, while the antlers, hides and hooves have been donated to Aq̓am. All meat preparation was conducted by qualified butchers and processed in facilities inspected and approved by Interior Health and the Ministry of Forests, Lands and Natural Resource Operations and Rural Development (MFLNRORD).

Trap vandalism and theft of City owned game cameras significantly hampered the efforts by the City and its contractor to fulfill the permit. A total of seven taxpayer owned, provincially managed traps were damaged beyond repair and six of the City’s taxpayer owned game cameras were stolen or had their memory cards removed. A criminal investigation by the Cranbrook RCMP lead to the arrest of two individuals over the weekend of February 15, 2020. Those individuals are to appear in court at a later date. 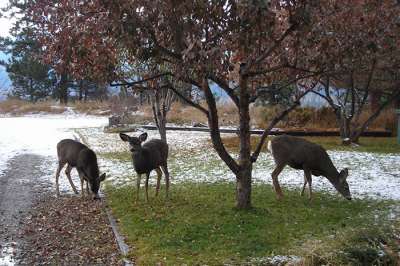 “We’re disappointed that vandalism and theft led to the low numbers in this year’s cull,” says Mike Peabody, Acting Mayor for the City of Cranbrook. “As a Council, our number one priority is public safety when it comes to spending tax dollars on removing urban deer. We know that generally urban deer keep their distance from humans, but we’ve had numerous occasions where deer have acted aggressively toward residents and have severely and fatally injured a number of dogs.”

A wildlife permit was issued to the City on October 10, 2019, which allowed for the capture of up to 70 animals (60 mule deer, 10 whitetail). Once operations began, it became apparent that there were again higher numbers of white-tail deer in areas with high deer aggression-related complaints from the public. The City made application to MFLNRORD to amend the permit to allow for the capture of additional whitetail deer. That request was approved, and the City received the amended wildlife permit on January 22, 2020, which allowed for the capture of 70 animals (35 mule deer, 35 whitetail).

The City was successful in its application earlier this year to access match funding made available to assist in offsetting costs surrounding urban deer management to the tune of $300 per animal. This fund also provided dollars to help the municipality with ongoing public education and awareness programs around urban wildlife overall through the BC Conservation Foundation’s WildSafeBC initiative.

Residents are encouraged to notify the City should they have instances where deer are acting aggressively. You can call 311 or report the incident by email at [email protected].