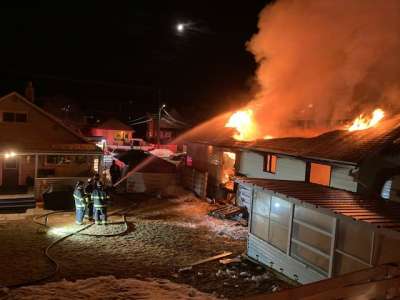 An initial crew of four firefighters and apparatus responded to the call. Upon arrival, firefighters assisted two occupants of the home out of the building and into the care of paramedics, where those individuals were transported to hospital.

An additional sixteen firefighters attended and the fire was able to be put out after several hours.

Cranbrook Fire & Emergency Services thanks the members of the BC Ambulance Services, the Cranbrook RCMP, and the utility companies for attending and assisting at the scene.

Fire crews remain on scene and will be there throughout the day Saturday extinguishing hot spots and working to investigate the cause.