Cycling and walking trails have been a high priority for our residents since the first Parks and Recreation Master Plan took place in 1995. This priority planted the seeds for an extensive citywide trail network, beginning with the nine kilometre paved Rotary Way Cycle / Walk Trail. Over the past decade, the Rotary Way has seen extensions to connect with the 26 kilometre NorthStar Rails to Trails. This linkage created a contiguous paved trail starting at Idlewild Park, and continuing all the way to downtown Kimberley. In 2017, the City began focusing on the needs identified in the 2016 Parks and Recreation Master Plan, to provide more cycling routes and interconnectivity throughout the City. Through a public planning process, a variety of routes were developed that would be implemented in a multi-phase approach. 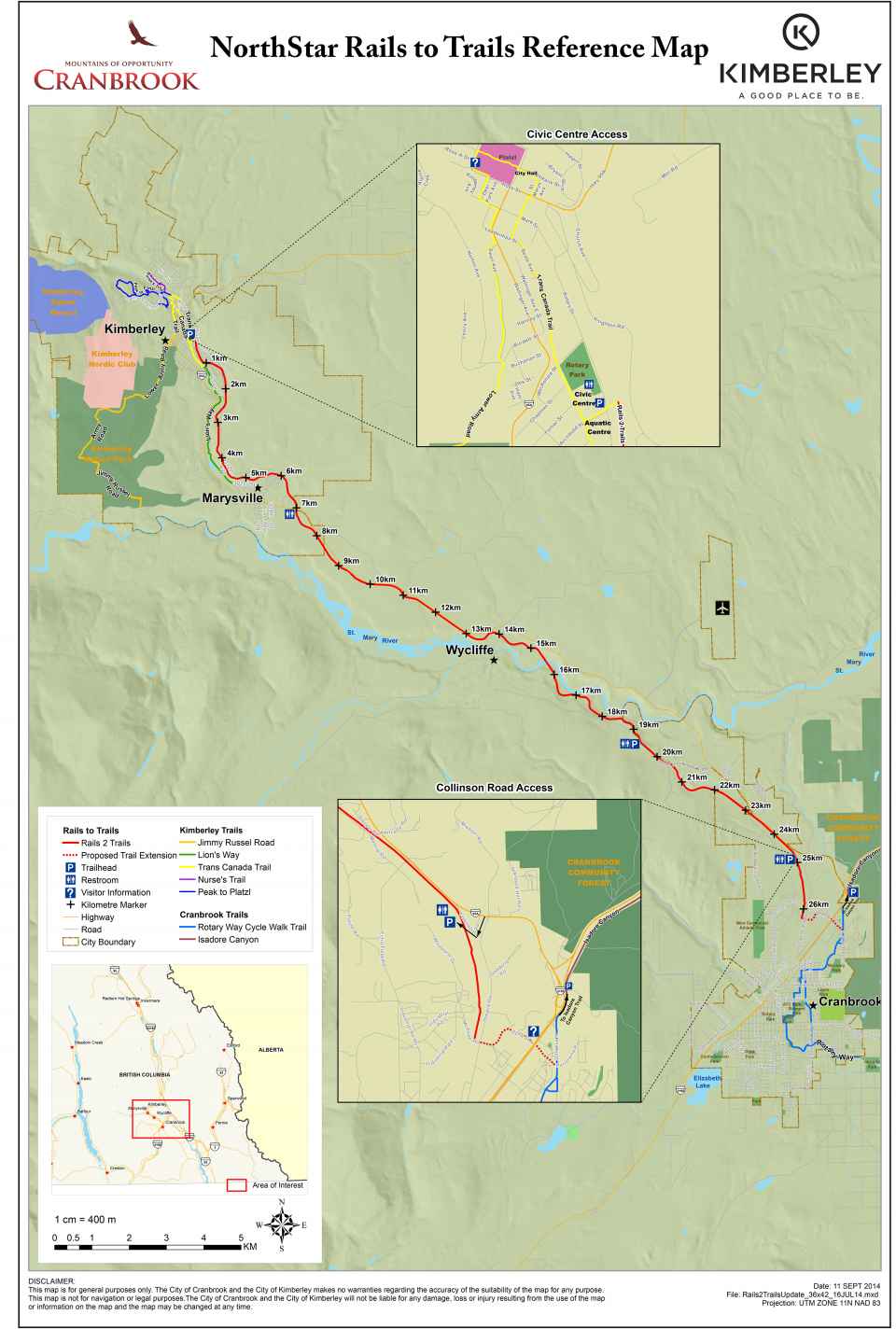 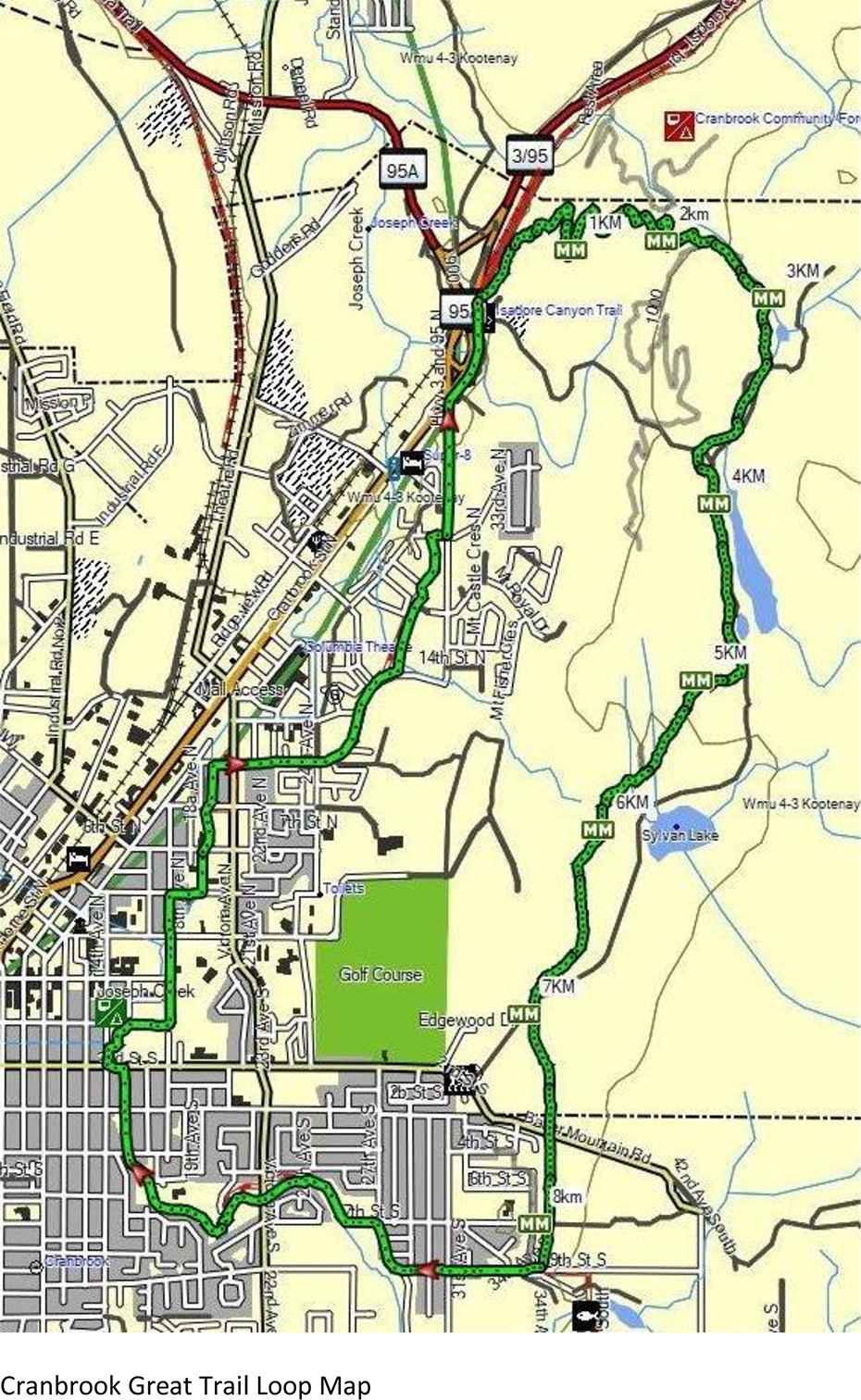 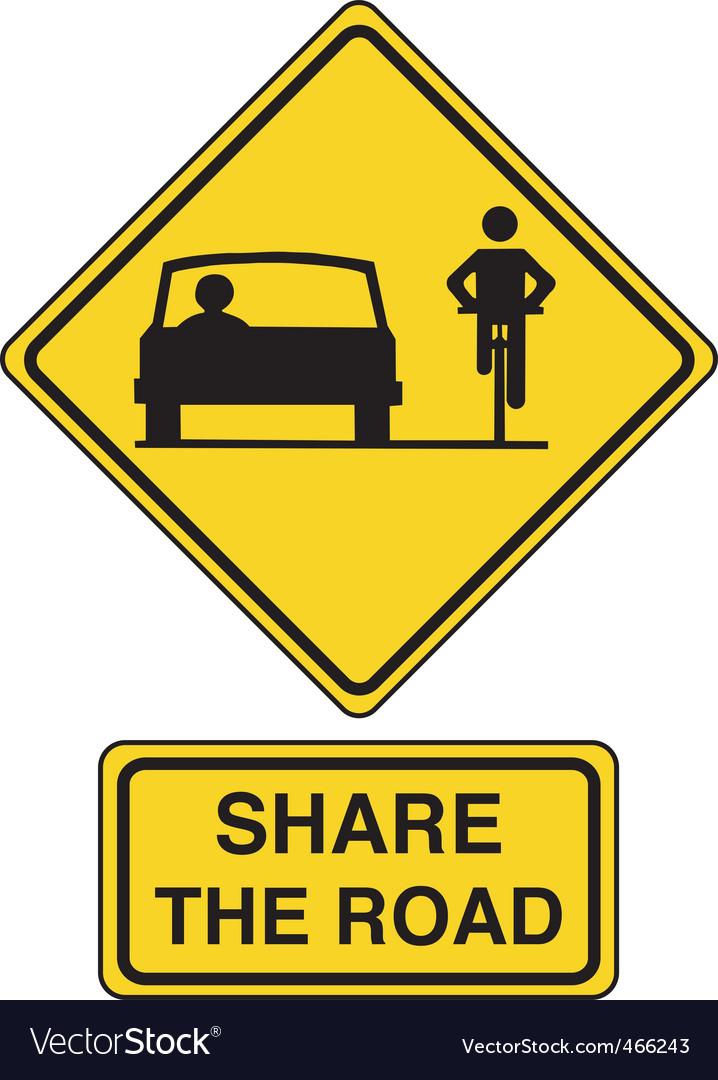 Routes with the Share The Road signage, and the lane painting sharrows featuring a bicycle and two white chevrons indicate the route is shared with both cyclists and motor vehicles. Share Lane Markings, or “Sharrows” are road markings used to indicate a shared environment for bicycles and motor vehicles.

The shared lane markings highlight cycling routes alerting all road users to the presence of bicycle traffic on the street, and may also be configured to offer directional and wayfinding guidance for cyclists. The shared lane marking is not a dedicated cycling facility, but a pavement marking which has a variety of uses to support a complete bikeway network. Although not a dedicated lane, cyclists may use the middle of the road, although it is encouraged to stay to the right side of the lane as much as possible.

Although it is the motorist’s and/or passenger’s responsibility to look first before opening their door, riding too close to parked cars can lead to serious injuries that can be avoided.

Routes that include signage and sharrows with a bike and a diamond indicate a reserved lane for cyclists. Designated bicycle lanes are a dedicated part of the roadway for the exclusive use of cyclists. Other road users may not lawfully drive, stand, stop or park in a designated bicyclel ane. Dedicated bike lanes may have one way directional signage as well as additional signage indicating where they start and stop. When approaching a slower cyclists in a bike lane it is important to use a bell or audible signal to notify the cyclists of your presence. Shoulder check to ensure the route is clear on your left to make a pass on the left leaving at least 1 meter clearance If passing at a particular section is not safe (cycle track section is too narrow or busy live traffic lane) wait behind the cyclists until it is clear to overtake. Although it is the motorist’s and/or passenger’s responsibility to look first before opening their door, riding too close to parked cars can lead to serious injuries that can be avoided. Routes with this designation can be found along 7th Avenue (between 11th Street S and 2nd Street South), and along College Way.

British Columbia’s Motor Vehicle Act says that cyclists have the same rights and duties as the driver of a motor vehicle. That means they must obey the same traffic rules and must be treated as if they were another car or truck on the streets and highways. It also means that cyclists may receive a traffic ticket for traffic rule violations as well. According to the Motor Vehicle Act, there are a number of rules that apply to cyclists. They include the following, a person operating a cycle:

For more information, visit the BC Motor Vehicle Act at http://www.bclaws.ca/civix/document/id/complete/statreg/96318_00

A guide to ICBC's tips on how drivers and cyclists can responsibly share the road.

A guide to the rules of the road, bike handling, traffic skills and the enjoyment of cycling for life. 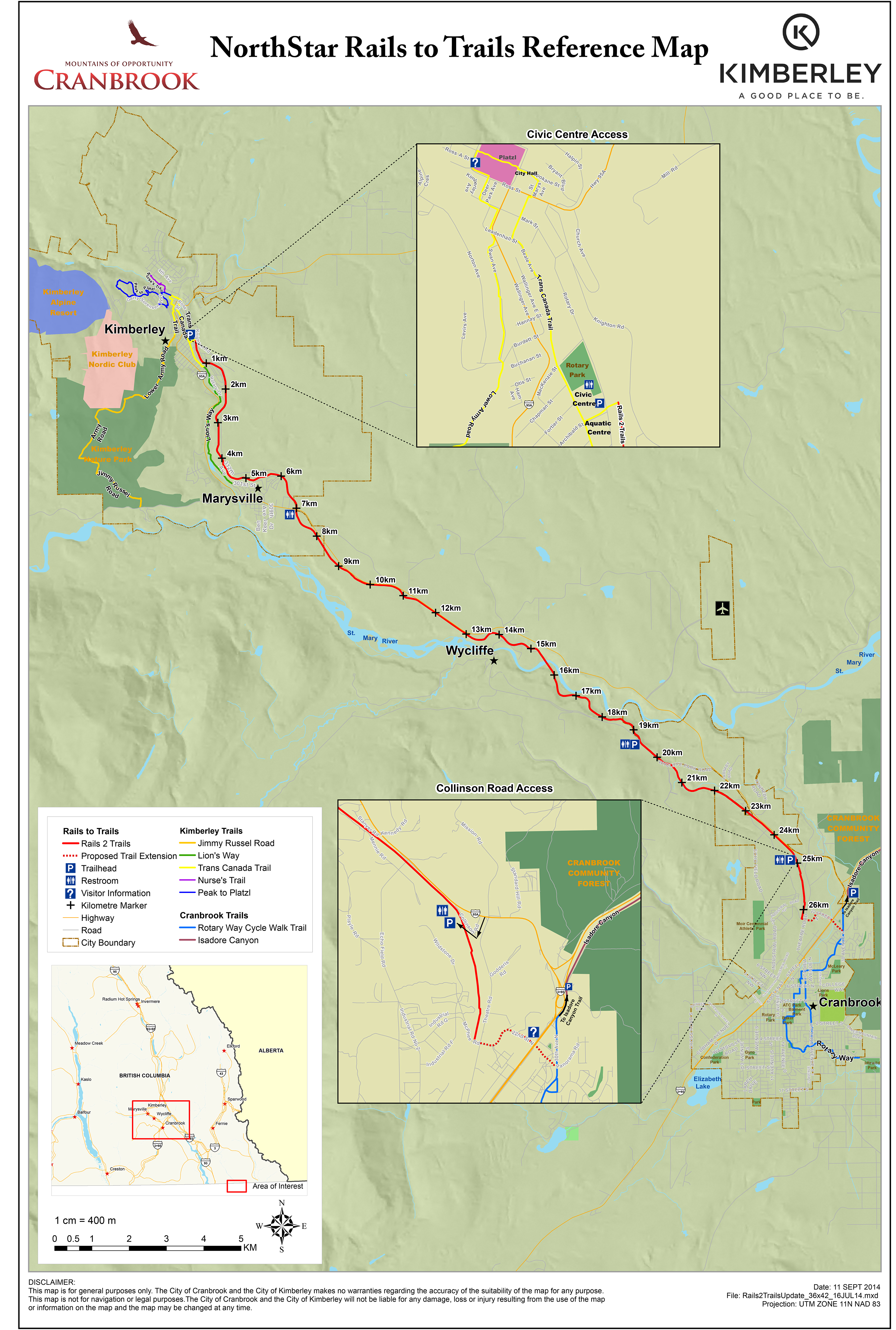 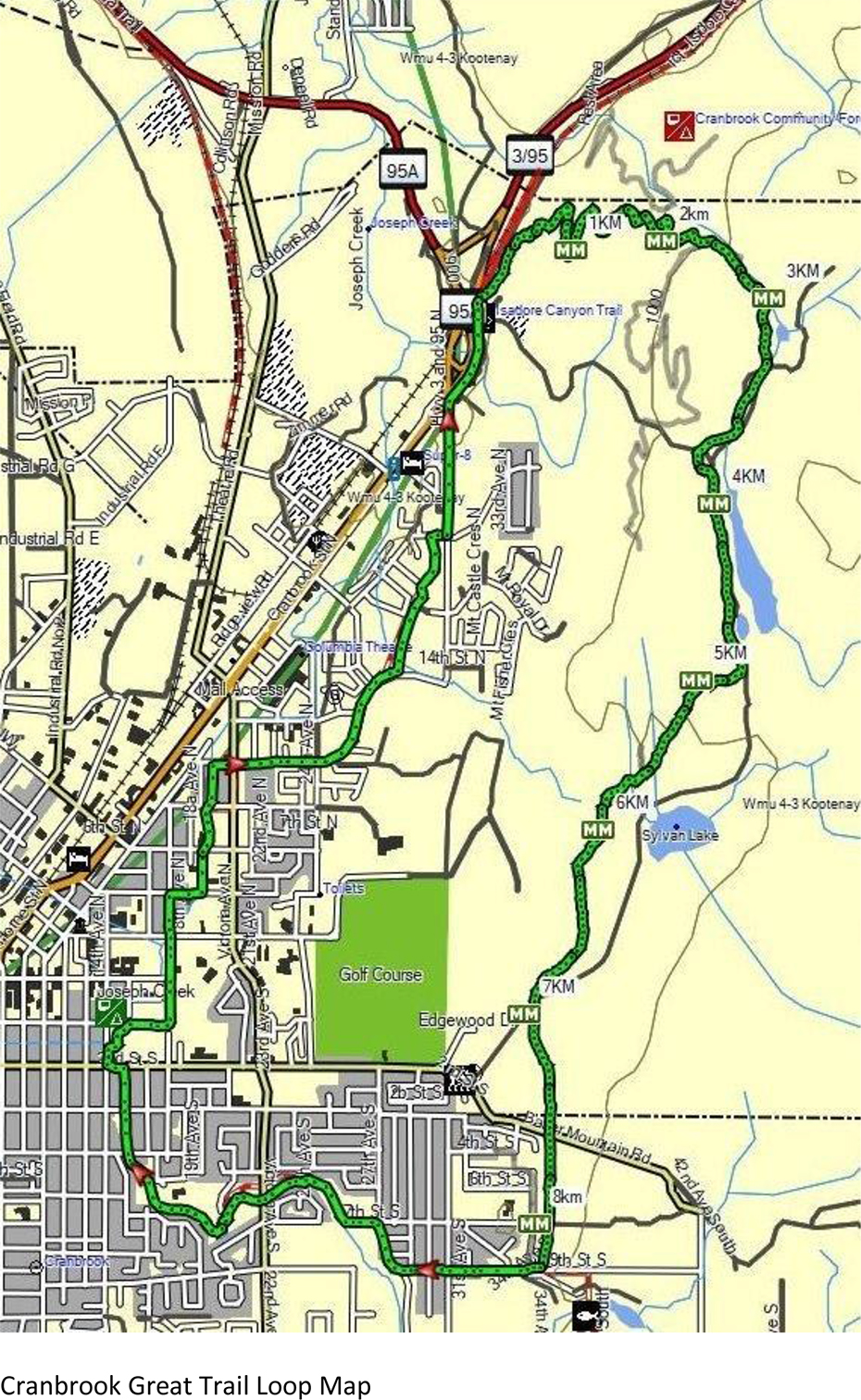