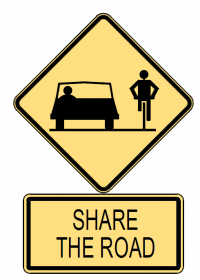 Routes with the 'Share The Road' signage, and the lane painting sharrows featuring a bicycle and two white chevrons indicate the route is shared with both cyclists and motor vehicles.  Share Lane Markings, or 'Sharrows' are road markings used to indicate a shared environment for bicycles and motor vehicles.

The shared lane markings highlight cycling routes alerting all road users to the presence of bicycle traffic on the street, and may also be configured to offer directional and wayfinding guidance for cyclists.  The shared lane marking is not a dedicated cycling facility, but a pavement marking which has a variety of uses to support a complete bikeway network.  Although not a dedicated lane, cyclists may use the middle of the road, although it is encouraged to stay to the right side of the lane as much as possible.