Cranbrook, BC (March 09, 2022) -- Warming weather has caused the City of Cranbrook to implement load restrictions on its streets to prevent and minimize damage that occurs with thawing of winter frost. 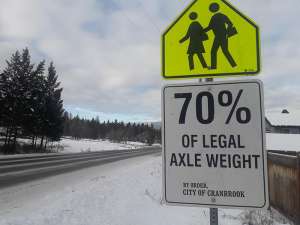 Per the City’s Streets and Traffic Bylaw No. 3021, effective Friday March 11, unless indicated otherwise, all streets within the City of Cranbrook are limited to 70% Legal Axle Loading, with some other local streets being reduced to 50% on a case by case basis. Signage will be put in place to help notify road users.

In order to accommodate continued commercial and industrial deliveries, the City has published a map of main roads that will still accommodate 100% Legal Axle Loading in these areas of the City. You can view the map @ https://cranbrook.ca/our-city/city-departments/public-works/city-road-load-restrictions-map/.

The City works closely with the Ministry of Transportation and Infrastructure, who issues regional load restriction notices, based on Road Weather Information System stations that track the frost depth and road strength in the region. The City intends to align its streets with the same restrictions, including where heavy loads may be able access the City from industrial or construction operations outside of City limits.

“When the frost first comes out of the ground the soils underneath the pavement become very saturated and unstable, which can quickly lead to significant pavement damage and unsafe road conditions from heavy loads. We’ve had this occur a few times over the past several years and we want to be as proactive as possible to protect our roads,” says Mike Matejka, Manager of Roads & Infrastructure.

For extraordinary loads, applications can be made for an overload or oversize permit through the City on a single load basis; however, this is not intended to permit continuous industry use.

For road users wanting updates on the Ministry of Transportation and Infrastructure Load Restrictions, they can sign up for email notifications at the following location: http://www.th.gov.bc.ca/bchighways/loadrestrictions/loadrestrictions.htm.