Notice is hereby given that under section 86 (Alternative Approval Process) of the Community Charter and section 20 of the Local Government Act, the Council of the City of Cranbrook  intends to petition the Minister of Municipal Affairs and Housing requesting an extension of the area of the municipality to include the following described lands as: 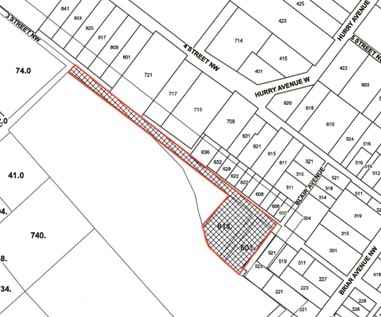 A request has been received from the owner of property located at 603 - 3rd Street NW in Slaterville be included within the municipal boundary of Cranbrook. The subject property is 1426 sq. m in size. The request to be included within the City would facilitate the owners’ proposal to replace the existing mobile home and connect to the City sewer services. The adjacent property located at 613 3rd Street NW is serviced with both City water and sewer and will also be included in the expansion.

Resident Elector – You are entitled to submit an Elector Response Form as a resident elector if you are age 18 or older on the day of submission, are a Canadian citizen, have lived in B.C. for at least six months, and have been a resident of the City of Cranbrook for the past 30 days or more.

Non-Resident Elector – You are entitled to submit an Elector Response Form as a non-resident property elector if you are age 18 or older on the day of submission, are a Canadian citizen, have lived in B.C. for at least six months, have owned and held registered title to a property in the City of Cranbrook for the past 30 days or more, and do not qualify as a resident elector.

NOTE: Only one non-resident property elector may submit an Elector Response Form per property, regardless of how many owners there may be.

If less than ten percent (1502) of municipal electors submit an Elector Response Form, the boundary extension request will be deemed to have the approval of the electors and the proposal may proceed to the Minister of Community and Rural Development for consideration. For the purpose of conducting the alternative approval opportunity, the number of electors is calculated as 15,015.

Elector Response Forms are available from City Hall City Hall located at 40 – 10th Avenue South, Cranbrook, BC, open 8:30 am to 4:30 pm Monday to Friday except Statutory Holidays or on the City website which can be downloaded here.