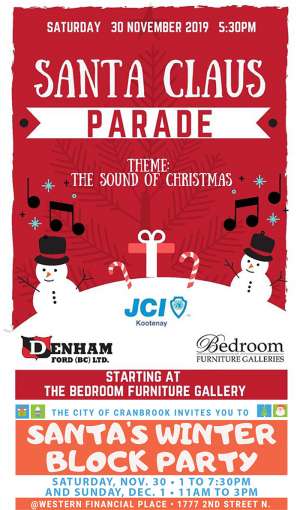 Cranbrook, BC (December 4, 2019) -- Santa’s Winter Block Party and Santa Claus parade were a huge success.  The new format was refreshing and enjoyed by all who attended.

There were so many people involved that helped achieve the wonderful event that had many people excited throughout the evening.  Special thanks go out to members of JCI for the parade, the Rotary Club for traffic control, City staff for various duties, and the organizers and vendors in the Market itself.

Over 3000 people attended the Farmers’ Market 80+ vendor booths in its new location at Western Financial Place, where there seemed to be a little something for everyone!  There were over 30 floats this year in the Santa Clause parade that was organized by JCI.  At the end of the parade it was wonderful to see the large crowd following the redesigned parade route down Baker Street to watch the fabulous fireworks show at Balment Park.  Special thanks to Emerald City Fireworks who put on the spectacular fireworks display.

The excitement of the season could be felt among all those who attended on the chilly evening.  I would like to extend a huge Thank You to the many organizations, individuals, City staff, businesses, etc., that all came together to make Cranbrook’s 1st Winter Block Party such a success.  This is just one of the many events Cranbrook is getting known for and why I’m proud to be the Mayor of such a great city!